SRS systems operate on a more or less exponential curve; every time you pass a card, the next review is scheduled at a time in the future that is the previous interval multiplied by some calculated constant. And if you pass the card every time with the same difficulty ranking, the review schedule will continue along the same formula until the interval reaches into multiple years, multiple decades if you bother with SRS long enough.

The trouble is, I don’t think that actually works. Yes for fairly short time periods it does work; up to a few months. But there comes a time when a card that you haven’t seen (and let’s limit this to simple vocabulary or kanji cards for discussion’s sake) outside the SRS system will be forgotten no matter what the elves inside the black box say (that’s how computers work right?).

I began to notice this with my vocabulary deck (since abandoned), which I kept up for probably close to two years. I also definitely notice it with my kanji recognition deck using the RTK keywords – there are some pretty rare characters in there. Take a look at the lifetime stats for this deck: 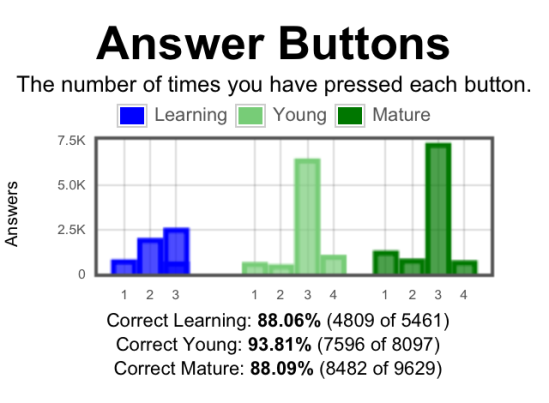 You can see that while for both young and mature cards the “good” button is the large majority, the overall percentage correct is significantly lower for mature cards; as well, the “hard” button was proportionately used a lot more, nearly double in fact. I doubt I’m the only one whose charts will look like this. And the reason for that is exclusively, I believe, that the standard SRS curve breaks down over multiple years; that no matter what the numbers say, if you haven’t seen a kanji or a word for a year or more you’re very likely not to remember it.

And as to what’s to be done about this problem, if in fact it is a problem? You might quite persuasively argue that if you haven’t seen a word for two years you likely don’t need to know it. But that depends on whether you’re sufficiently engaged with the language or not. For example I don’t really do anything at all with German any more so there are many very basic words that I don’t know, but if I were actively reading, or conversing, or whatever, it would very quickly become apparent that I did in fact need them. So if mastery of the language is your objective then yes, this is a problem – and the solution I completely unsurprisingly postulate is simply this, read more! The algorithm might be a bit off but if you see the word even once or twice in between that two, three, five year review interval, you’re certain to remember it; and the very best way to do that is to maximize your time actively engaged with the language; and the very best way to do that is to read more.

Additionally, I would caution (voice of experience – hey, it’s all I’ve got to stand on here) against adding very rare words or characters to your decks in the first place. Sure it might be a cool word, but if it shows up in one spot in one book and you aren’t likely to see it elsewhere for years, just enjoy it in the moment and then let it go. Once you’re more advanced and more likely to see it a bit more frequently, then feel free to add it, if you still think you need to. And of course knowing which words fall into this category only comes from doing this wrong multiple times, so maybe just ignore this paragraph.

What have we got here …

what has been said